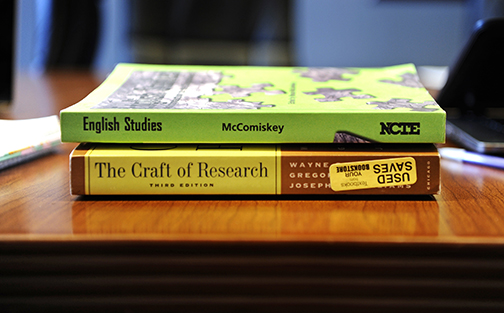 This is an archived copy of the 2019-20 catalog. To access the most recent version of the catalog, please visit http://bulletin.ndsu.edu.

Our program encourages individuality and collaboration as it prepares candidates for academic and non-academic careers.  Graduates have gone on to top-tier Ph.D. programs or opted to work in industry or for national and local nonprofits.

Graduate studies in English is open to all qualified applicants who hold a BA or a BS in English or a related field from an accredited college or university.

Teaching assistantships are available and are awarded on the basis of the applicant's scholastic record, letters of recommendation, and the student's letter of interest. All applicants that are accepted by the Graduate School in good standing are eligible for an assistantship in the Department of English. Letters of interest (if applicable) for teaching assistantships should be submitted at the same time as the application to the program is submitted to the Graduate School and should address prior experience and qualifications.

Graduate students are awarded teaching assistantships for the academic year only. University graduate tuition charges (not fees) are waived for all TAs. Teaching Fellowships are available to selected TAs after completing course work. Moreover, the Department of English annually awards the Rooney Scholarship and the Madeline S. Giddings Scholarship.

The Master of Arts program consists of 27 credit hours of letter-graded course work with an overall GPA of 3.0 or better, and (at least) a 3 credit Master's Paper. Note that ENGL 764 Classroom Strategies For TA'Sis required of all GTAs who have not taken a similar class elsewhere.