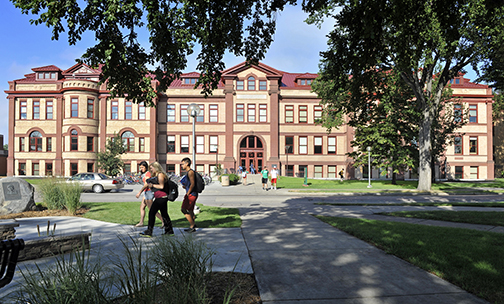 This is an archived copy of the 2019-20 catalog. To access the most recent version of the catalog, please visit http://bulletin.ndsu.edu.

The Department of Mathematics offers graduate study leading to the degrees of Master of Science (M.S.) and Doctor of Philosophy (Ph.D.). Advanced work may be specialized among the following areas:

Beginning with their first year in residence, students are strongly urged to attend research seminars and discuss research opportunities with faculty members. By the end of their second semester, students select an advisory committee and develop a plan of study specifying how all degree requirements are to be met. One philosophical tenet of the Department of Mathematics graduate program is that each mathematics graduate student will be well grounded in at least two foundational areas of mathematics. To this end, each student's background will be assessed, and the student will be directed to the appropriate level of study.

The Department of Mathematics graduate program is open to all qualified graduates of universities and colleges of recognized standing. In addition to the Graduate School requirements, applicants must have earned a cumulative grade point average (GPA) of at least 3.0 or equivalent in all advanced mathematics courses at the baccalaureate level.

All students in full standing and, in certain situations, students in conditional status are eligible for assistantships. International students must show proficiency in reading, writing, and speaking English. In particular, they must pass an oral proficiency interview, which is a Test of Spoken English (TSE) prior to receiving a teaching assistantship. This interview is the culmination of the five-week Intensive English Language Program (IELP) available each summer. An indication, but not a guarantee, of being able to pass this interview is a TOEFL score of at least 600 (paper test) or 247 (computer test). All international students applying from outside the United States for a teaching assistantship must expect to take the IELP.

Assistantship applications will be considered at any time. However, opportunities are improved for those received by March 1 preceding the fall semester of intended enrollment.

At least one year of academic work must be spent in residence at NDSU in fulfilling graduate requirements for each graduate degree earned. The M.S. customarily takes two years to complete: the Ph.D. usually last three years beyond the master's. Students must maintain a cumulative GPA of at least 3.0 throughout their graduate career.

The Doctor of Philosophy degree is awarded in recognition of high scholarly attainment as evidenced by a period of successful advanced study, the satisfactory completion of prescribed examinations, and the development of an acceptable dissertation covering a significant, original aspect of mathematics.

Ph.D. students have 3 years from first enrolling in a 700 level Mathematics course as a graduate student to complete the written Preliminary Examination requirement.

A student advances to candidacy after completion of the preliminary oral examination. All students must advance to candidacy no later than the start of their fourth year in the graduate program of the Department of Mathematics. Extensions may be granted after review and approval by the Graduate Committee, subject to Graduate School Policy.